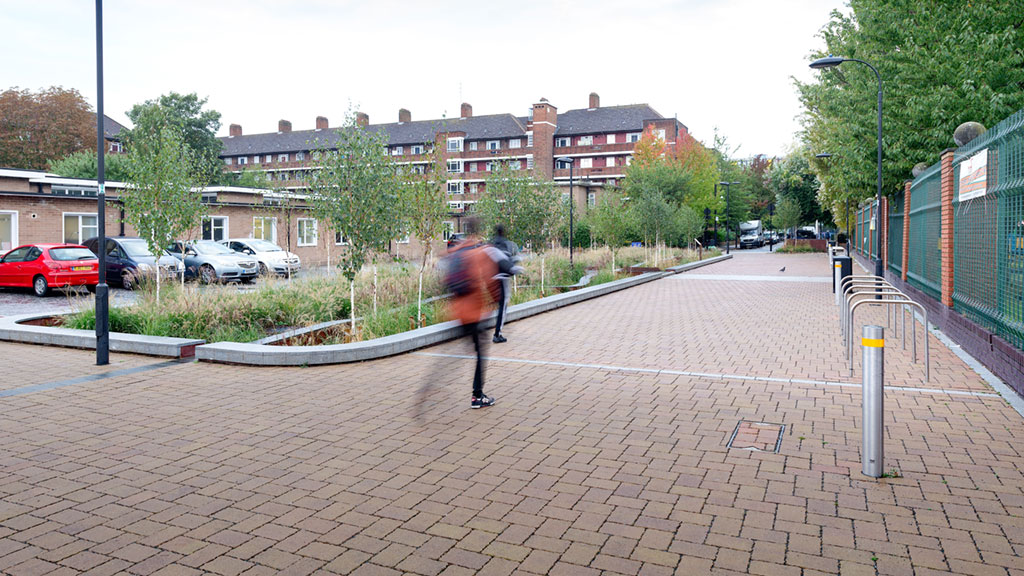 A recent GLA report highlights the damage caused by vehicle pollution in road and surface water drainage to our rivers and streams. Concrete block permeable paving offers the obvious starting point to address this growing problem.

Pollution is present and can build up on all hard surfaces used by vehicles (including electric), from motorways to driveways. This major problem results from tyre or brake wear, oil or fuel leaks, dust from the atmosphere and other sources. Rainfall washes this diffuse pollution off the surface, carrying trace metals, hydrocarbons and – potentially – more than 300 different pollutants.

Although the ‘combined’ (foul and surface water) sewers found in our older urban centres convey these pollutants to treatment plants, some pollutants are still not addressed and, during times of high rainfall, untreated water may surcharge directly into watercourses. However, dedicated ‘surface water’ and highway drainage is more worrying, as it generally passes directly to watercourses or groundwater without any effective treatment at all. It has been used widely throughout our more recent suburban areas and on new developments.

The long- and short-term damage caused by pollutants in surface water drainage to the biodiversity and health of our rivers and streams is highlighted in the Greater London Authority ‘Road Runoff Water Quality Study’ (December 2019). It concludes that: “London’s roads are harming London’s rivers” and proposes research into the addition of SuDS features to manage runoff pollution from the most damaging roads.

There is a wealth of research available from around the world showing that concrete block permeable paving is particularly effective at removing the main pollutants of concern – i.e. total suspended solids, hydrocarbons and metals. It also attenuates runoff during storms for later, gradual release to other drainage. Its application as a multifunctional source control within our streetscapes presents an obvious solution to the growing problem of vehicle pollution – whether retro-fitted in place of existing paving or designed-in to new developments.

Awards BSI Campus Housing Permeable Permeable & SuDS Permeable Paving Public Realm SuDS Trees Urban Regeneration
We use cookies to ensure that we give you the best experience on our website. No information is ever shared with any third parties.Cookie settingsOk
Privacy & Cookies Policy

This website uses cookies to improve your experience while you navigate through the website. Out of these cookies, the cookies that are categorized as necessary are stored on your browser as they are essential for the working of basic functionalities of the website. We also use third-party cookies that help us analyze and understand how you use this website. These cookies will be stored in your browser only with your consent. You also have the option to opt-out of these cookies. But opting out of some of these cookies may have an effect on your browsing experience.
Necessary Always Enabled
Necessary cookies are absolutely essential for the website to function properly. This category only includes cookies that ensures basic functionalities and security features of the website. These cookies do not store any personal information.
Non-necessary
Any cookies that may not be particularly necessary for the website to function and is used specifically to collect user personal data via analytics, ads, other embedded contents are termed as non-necessary cookies. It is mandatory to procure user consent prior to running these cookies on your website.
SAVE & ACCEPT